England is among the teams that have used the tournament to criticise Qatar on human rights and LGBT issues.

The English Football Association’s chief executive has declined to say whether his team will denounce the UAE’s human rights violations as they had in Qatar.

The FA is currently tied into a sponsorship deal with the UAE’s Emirates airline until 2024.

In an interview posted to Twitter on Tuesday, Sky News sports correspondent Rob Harris asked FA chief Mark Bullingham if England will be “consistent” when dealing with the UAE, as there are concerns about human rights violations.

Bullingham said that the federation intends to be “respectful” of other people’s “cultures and traditions.”

Since gaining the right to host the World Cup back in 2010, Qatar has come under increased international scrutiny on human rights and LGBT issues. However, The World Cup hosts have accused critics of “double standards” in singling out Qatar for unprecedented criticism, citing reforms and improvements Qatar made to address concerns.

Bullingham said that the criticism of Qatar was intended to spark change throughout the region, not just in Qatar itself.

“When you look at the UEFA  working group on human rights, a real challenge for this tournament was not to influence human rights in Qatar, but the region,” he said.

“We think that it will effect positive change and we have seen some of the positive changes that have been made in Qatar start to ripple out to other parts of the Middle East. We have seen obviously the removal of kafala here has led to some reduction of Kafala in other countries and that will carry on and that’s a positive thing.”

Bullingham declined to discuss specifics of the team’s sponsorship negotiations with Emirates when asked if the English FA will pressure the UAE to denounce LGBTQ+ discrimination and migrant labor rights given that England has a close relationship with the UAE state airline.

England is among the seven European soccer federations that wanted to wear the  “One Love” captain armbands during Qatar World Cup to advocate for  LGBT rights. However, the teams abandoned the move  after FIFA’s threat of on-field punishment after banning the armbands.

No player had the “One Love” armbands Monday, although England’s Harry Kane wore the FIFA-approved “No Discrimination” armband in the match with Iran. 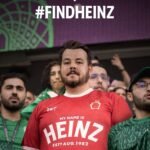