The 77th UN General Assembly’s high level discussion kicked off in New York on Monday where world leaders and officials from 193 member states engage on extensive discussions over global issues.

The first official meeting at the UNGA took place in 1946 in London with the participation of only 51 countries before selecting New York as the location for the UN’s headquarters.

Since, every year, leaders, officials and policy makers come together in an effort to take effective action in promoting and encouraging peace and stability globally.

Whilst the agenda of the Qatari officials’ addresses are yet to be known, they are likely to include the global energy crisis, regional developments and the Palestinian cause – given their centrality to Doha’s foreign policy.

The latest high-profile session comes in light of an energy crisis that was made worse by the Russian invasion of Ukraine in February this year.

While the gas industry experienced a period of disruption due to the Covid-19 outbreak, the Ukraine crisis heavily contributed to the situation. Europe received 40% of its gas supplies from Moscow prior to the invasion, with almost a third of the shipments passing through Ukraine.

In his first press interview since 2017, Amir Tamim noted the impacts the Russian invasion of Ukraine crisis has had on the energy crisis.

“The war in Europe complicates the situation enormously, but the problem was there before. As for us, we supply our energy largely to Asia but also to Europe, through long-term agreements and also on the spot market. We want to help Europe and we will supply gas to Europe in the coming years,” Sheikh Tamim told French Magazine Le Point.

With European countries working towards ditching Russian gas, some turned have to Qatar, a country that has been dominating supplies of liquified natural gas (LNG). Some of the European countries that sought Qatari gas supplies include Italy, the UK and France.

Qatar has the world’s third-biggest proven natural gas reserves and is expanding its LNG production through its North Field Expansion project.

Under the first phase of the project, the biggest of its kind globally, Qatar is raising its LNG production from 77 million tonnes to 110 million tonnes by 2025, representing a 43% increase.

The second part of the project, the biggest of its kind, will ramp up Qatar’s LNG production to 126 million tonnes by 2027.

With concerns over Europe’s already fragile energy supplies increasing ahead of the winter season, there is a possibility the matter will be discussed among both Qatari officials and the international community.

The Palestinian cause has long been at the heart of Qatar’s foreign policy, taking up a large portion of the amir’s previous UNGA speeches.

Qatari officials continuously condemn the illegal Israeli occupation of Palestine and slam its ethnic cleansing of indegineous Palestinians. Unlike some of its neighbours, the Gulf state has repeatedly refused normalising with the Zionist regime for its ongoing human rights violations.

“It appears from time to time that the Palestinian issue can be marginalised on the international agenda, or that a deeply rooted national issue can be circumvented by putting forward ideas such as improving the economic situation of the population under occupation instead of eliminating the occupation,” Amir Tamim told the UNGA last year.

This year’s UNGA comes just a month after Israel launched new deadly attacks on the besieged Gaza Strip, which lasted for three days after a Qatar and Egypt brokered ceasefire.

The importance of the Palestinian cause will likely be raised in various sessions in an effort to invoke a return to the peace process and establishment of an independent state within the 1967 borders.

The latest session also comes amid ongoing calls to hold the Israeli regime accountable for the killing of veteran Al Jazeera journalist Shireen Aby Akleh on 11 May.

Four months on, Israel has not been held to account for the killing, which Al Jazeera said was ‘deliberate’ given the apartheid state’s continuous attempts to silence Palestinian voices.

Qatar frequently calls on the international community to intensify its efforts in combatting terrorism, with the Gulf state leading efforts in achieving this goal.

This year, Qatar extended its partnership with the UN Office for Counter-terrorism (UNOCT) for another three years between 2024 and 2026.

The agreement also entailed the establishment of a UN Counter-terrorism Office in Doha, which was inaugurated last year. The office was the first to be established in the region.

In 2015, Qatar and the UN Office on Drugs and Crime (UNODC) signed a $49 million agreement to fund projects that focus on “countering violent extremism through prisoner rehabilitation and social integration programmes, and youth education for justice”.

As firm believers in the role of education in empowering the youth and helping the global fight against terrorism, the UNGA unanimously passed resolution 74/275 in 2020 to establish September 9 as the International Day to Protect Education from Attack.

The initiative was proposed by Sheikha Moza bint Nasser, Chairperson of Education Above All Foundation (EAAF) and a member of the UN Sustainable Development Goals Advocates Group.

The Qatar Fund for Development (QFFD) is expected to engage in discussions on expanding global education cooperation, given its prominent role in ensuring access to education worldwide.

“For the education of the youth and mobilisation of the communities against terrorism to gain credibility, we must be diligent in defining terrorism and standing against it,” said Qatar’s amir during his UNGA address in 2016.

Empowering women and girls across the world has been another key goal that Qatar has advocated for in the past years at the UNGA.

The Gulf state has repeatedly called for the need to empower women and ensure they achieve their full rights, including their access to education and work. This was seen last year in Afghanistan following the Taliban’s takeover of Kabul.

Several statements were made by Qatari officials including Amir Tamim and Sheikh Mohammed since last year, in which they called on the acting Afghan government to ensure the protection of women and girls rights.

When the Taliban banned girls this year from going to school, Qatar was quick to release a statement expressing its disappointment in the decision. Doha has also been a safe space for Afghan student evacuees, including the all-girls robotics team the Afghan Dreamers, who are continuing their education in Qatar.

Beyond Afghanistan, Qatar has worked on providing education to women and girls in threatening environments, including Palestinians living under Israeli occupation.

With Qatar’s assistant foreign minister being among the Gulf state’s delegation, a discussion will likely take place on the issue, given Al Khater’s vocal support for women’s empowerment.

During his latest interview, Sheikh Tamim stressed that men and women are equal in the eyes of God.

“The role of women is vital in our society. In Qatar, women outperform men at university. They make up 63% of students. In the workforce, it’s about 50/50. Within our government, we have three women ministers, they are doing a great job,” said Sheikh Tamim.

“Of course, we are aware that they [women] are discriminated against in the world, but we are totally against it,” he added.

This year’s UNGA is taking place just two months before the 2022 FIFA World Cup, which Qatar has been preparing for since winning the bid to host it more than a decade ago.

Kicking off on 20 November, the World Cup is going to introduce people around the world to the Middle East’s rich culture, given that Qatar is the first country in the region to host the event.

A key area of focus throughout the preparations has been the World Cup’s legacy and the promotion of football for peace. Such goals have been driven by the organising body of the World Cup in Qatar, the Supreme Committee for Delivery and Legacy (SC).

On Saturday, days before before the high-level UNGA debate, Qatar launched the “Scoring For The Goals” campaign at the UN Headquarters. The initiative exhibits the importance of utilising football in the development of future generations.

The launch was attended by Sheikh Mohammed and several other Qatari officials along with the SC’s Secretary-General Hassan Al Thawadi.

“Football in particular breaks down barriers, creates friendships and enhances cultural understanding, no matter beliefs, nationality or economic status…when harnessed properly, it profoundly improves the lives of all and transforms our world for the better,” said Al Thawadi. 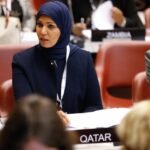