As the count down to the start of the global showpiece in Qatar accelerates, a mathematical model which succeeded in its last two predictions now thinks it knows which team will be lifting the World Cup trophy.

Developed by Joachim Klemen, the London-based stockbroker successfully foretold that Germany would win in 2014 and France in 2018.

Hoping the third time is the charm, Klement’s prediction factors in current team strength as well as socioeconomic variables, including the GDP and population of the country.

Undoubtedly, a margin of error is also included within the calculation. As Klemen expresses, it isn’t a guaranteed prediction but an element of chance.

“If I am right, it’s skill, and if I am wrong, it’s somebody else’s fault,” Klemen said.

Argentina is predicted to win it all, as per Klement’s prediction.

There may be some truth to Klement’s model as Argentina will enter the World Cup not having lost a game since 2019.

There is a profound history between England and Argentina that goes back decades to the 1986 FIFA World Cup in Mexico.

The late Diego Maradona knocked out the English team 2-1 to win the 1986 World Cup with a victory over West Germany in the final match.

Seeking revenge for his country after England’s dominance in the 1966 World Cup quarter-final, Maradona’s win is a prize moment for the Argentines.

England’s national team is considered a favorite at Qatar’s winter tournament, but the last few weeks have spoiled the team’s potential as fans have not been fond of their squad’s performance.

The Gareth Southgate team will first need to qualify for the knockout round by defeating the Iranians, Americans, and the Welsh squad – an unquestionably challenging conquest for the English.

Unlike England, Argentina has been positioned to ease within its scheduled group matches as it will face Saudi Arabia and Poland.

Mexico will be the most demanding match for the South Americans, but the team has been training for that through its rounds of preparations. 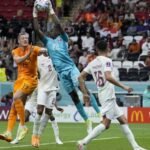