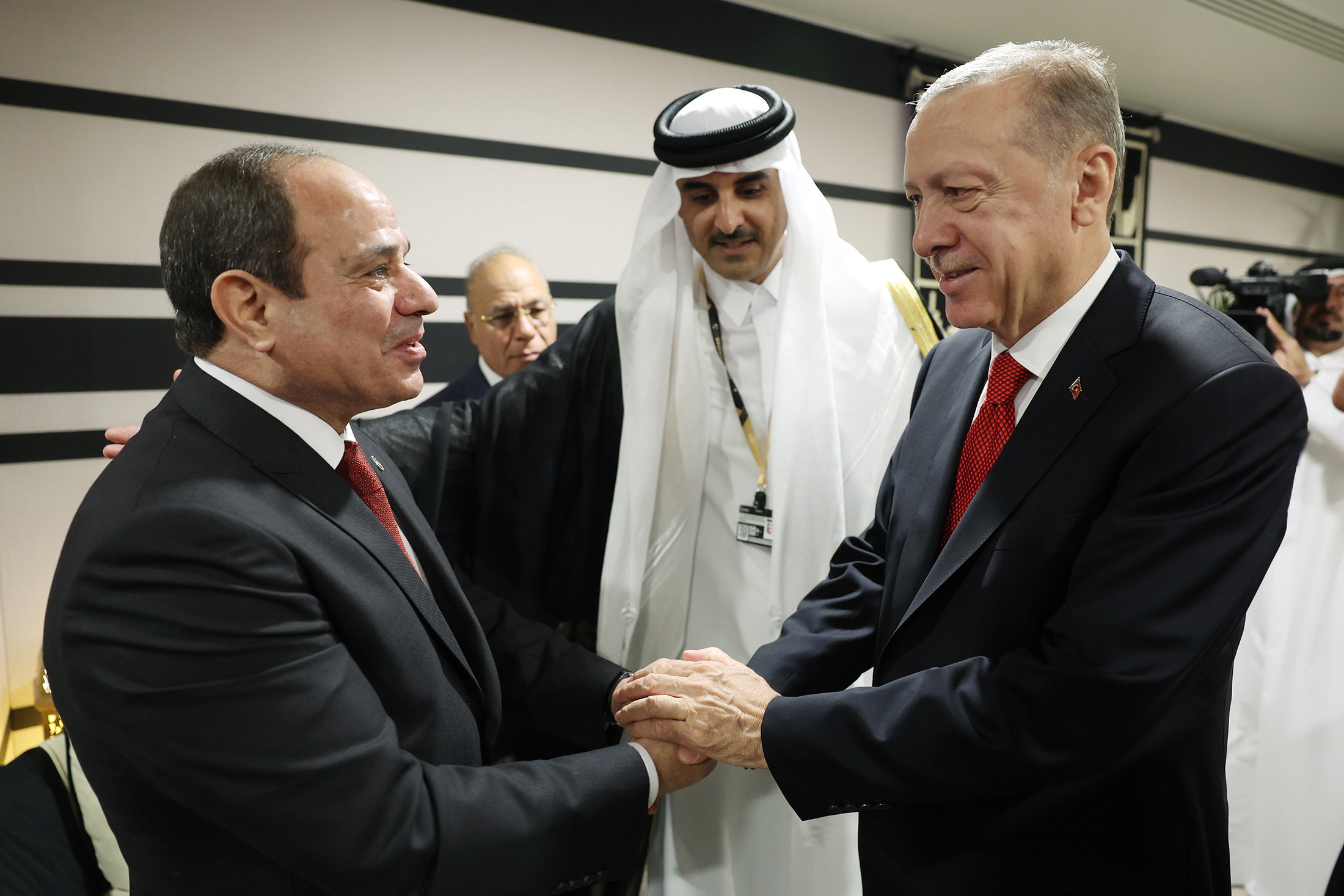 The handshake came after occasional talks and initiatives to strengthen ties, as part of a larger effort to alleviate divisions in the region.

Turkish President Recep Tayyip Erdogan has announced that he will meet with his Egyptian counterpart Abdel-Fattah El-Sisi, after the two leaders shook hands earlier this month at the FIFA World Cup.

“The process with Egypt has started,” Erdogan said in a recorded interview with Haberturk TV on Sunday. “After minister-level talks, we will get together.”

Turkey’s official Anadolu news agency released a photo of the two presidents’ meeting on November 20 in Doha. The handshake came after occasional talks and initiatives to strengthen ties, as part of a larger effort to alleviate divisions in the region.

For the first time, Erdogan made it known that their meeting in Doha lasted between 30 and 45 minutes, and that “both sides were happy with the meeting.”

“If relations with Egypt are back on track, we can do the same with Syria,” Erdogan said, indicating that a meeting with Syrian President Bashar al-Assad is also possible.

Since the 2013 military-backed overthrow of Mohammed Mursi, the late Egyptian Muslim Brotherhood president supported by Ankara, relations between the two countries have been tense.

Egypt and Turkey cut diplomatic ties following the coup. Turkey then offered asylum to Muslim Brotherhood members and leaders, allowing them to openly oppose Sisi’s government through the operation of satellite television channels.

Regional conflicts intensified the rift between Cairo and Ankara. The active role Turkey plays in the region, which stretches from the Arabian Gulf to Libya, is seen as a threat to Egypt’s regional influence and role.

This fact became evident after Turkey intervened in Libya and supported the government of Tripoli against Libyan National Army leader Khalifa Haftar, who is based in Benghazi and is backed by Egypt, among others.

Energy resource exploration in the Eastern Mediterranean added to the already tense situation between Egypt and Turkey. Egypt’s initiative to create a regional forum that would include nations in the Mediterranean Sea that produce oil and gas was particularly significant. The two main rivals of Turkey, Greece and Cyprus, as well as Israel, Jordan, the Palestinian Authority, Italy, and Egypt, joined the East Mediterranean Gas Forum (EMGF) in 2019.

However, despite its regional influence, Turkey was purposefully left out of the EMGF.

In retaliation, Turkey and the Tripoli-based government of Libya signed a maritime agreement to establish an exclusive economic zone in the Mediterranean that stretches from Turkey to Libya.

The agreement would give Turkey the ability to obstruct the EMGF’s agenda, including a proposed pipeline that would connect Greek and Israeli waters with the rest of Europe.

Turkey was also enraged by Egypt’s close ties to Saudi Arabia and the United Arab Emirates. The alliance between Cairo, Riyadh, and Abu Dhabi was seen in Ankara as a regional axis that was aimed at undermining not only Turkey’s influence and role in the region, but also its economy and stability.